Facts About Thyroid Cancer You Really Should Be Aware Of 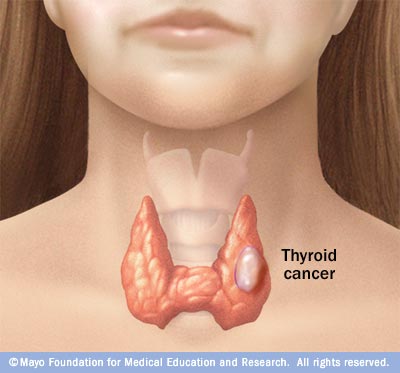 Since 2003, September has been celebrated as Thyroid Cancer Awareness Month, and each year at this time people around the world take steps to bring more attention to this disease and how it can be detected and managed. In Olive Branch and elsewhere around this country, caregivers take time to educate themselves more about what this disease is all about, and how it can be detected early on so that steps for recovery can be taken. Senior home care professionals usually know what to look for, so they can alert medical personnel about the potential for thyroid cancer in their patients. Here are some of the more important facts about the disease that you should be aware of.

What exactly is the thyroid?

If you don’t remember from Biology class, the thyroid is a gland about two inches wide which is located in your neck, and it has a tremendous influence over nearly every aspect of your bodily functions. It produces thyroid hormone, and this hormone is responsible for the regulation of your heartbeat, your temperature, your metabolism, and even the various moods you go through. In short, it influences so many critical body processes that it impacts almost every cell in your body, which is a staggering influence when you think about it. There are as many as 30 million Americans who suffer from some type of disorder of the thyroid, and more than 60,000 Americans who contract thyroid cancer each year. Thyroid cancer can occur at any age, so no one is exempt from the possibility.

Who is at risk for thyroid cancer?

Generally speaking, the majority of thyroid cancer patients are less than 55 years old, but only about 2% of these cases affect children or teenagers. However, it is the most prevalent type of cancer in women between the ages of 15 and 29, and it’s the second most commonly occurring cancer, other than breast cancer, for women between the ages of 30 and 39. In fact, 75% of all thyroid cancer cases affect females, although science is at a loss to explain why that is. While there does seem to be an association between thyroid cancer and women between the years of puberty and menopause, there are no specific hormonal influences which can be pinned down. Some studies have indicated that estrogen may trigger the growth of thyroid cells both benign and malignant, although this has yet to be demonstrated conclusively.

The tricky part about diagnosing thyroid cancer is that most patients don’t really exhibit any clear symptoms, although some do have neck discomfort, or they might feel a lump in their neck. Some patients will notice hoarseness in their voice, which would be due to the presence of cancerous tissue pressing against vocal cords and the trachea. This might also cause difficulty with swallowing, and when that difficulty persists, it could be an indicator of thyroid cancer tissue. Some individuals have also been bothered by persistent cases of diarrhea, which have no other explanation. Unfortunately, it doesn’t occur to most people to connect the persistent case of diarrhea with the possibility of thyroid cancer, so this particular symptom is often ignored.

We use cookies to ensure that we give you the best experience on our website. If you continue to use this site we will assume that you give your consent for that.OkPrivacy policy